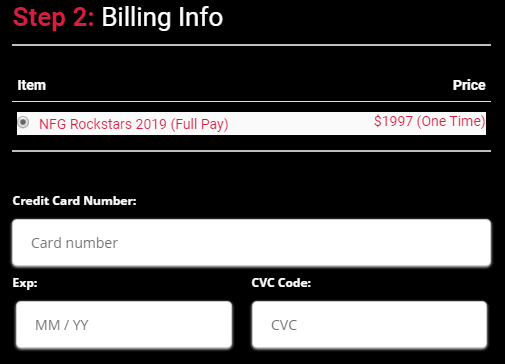 Dori Friend here on behalf of SEO Rockstars AND NFG SEO!Now for anyone who’s been to any of our events in the past you know we like to over deliver by providing the most up to date ranking/marketing strategies on the planet. And I’m not talking Shiny Object Fluff (SOF I like to call it). I mean, if you want to just pay a bunch of money to fly out, stay in a hotel, and not learn anything let me know and I’ll set it up. Ha

That’s what we like to call Green Hat SEO! Screw Black Hat vs. White hat…. At the end of the day what matters most to us is seeing you rake it in using what we’ve shown you either online or at an event (where we can show the really juicy stuff).
But there’s a problem with throwing an absolutely amazing event every year…
It kind of makes it hard to top last year, and the year before, and the year before.
You see, this will be my EIGHTH year in a row of trying to top myself year after year and I’ll be honest – it gets harder every year.
And THAT is why I’ve decided to bring in the big guns this year!

I’m sure you’ve hear of NFG SEO (AKA the guys that like to teach REAL Money Making Tactics that you can start using immediately) then you’ve definitely been missing out because while I’ve been doing my thing all these years, these guys have been in the trenches, building up empire after empire.

Whether it’s building a massive client agency, a PPL Empire, or network upon network of affiliate sites, they have seen just about everything.

And the best part is….
They’ve hosted a number of smaller, underground events where they’ve actually created a number of millionaire students, meaning they practice what they preach AND they are able to pass it onto virtually anyone willing to take action.
But I’ve got more for you…

Probably the largest benefit of bringing the NFG Crew on board is their connections. Whether it’s to their private affiliate networks who actually pay well – which they might or might not be sharing at the event

– or their ability to pull in the cream of the crop speakers (as in the ones that can perform absolute circles around your typical SEO Gurus) who are coming to THROW DOWN!

So… If you are ready to blow up the last quarter of 2019 (and well beyond of course) then reserve your seat now because I 100% expect this event to sell out faster than any other we’ve hosted.

Cody Burch – The Ultimate Pay What You Want Course

Traffic Badassery – The Brand New FB/Clickbank Formula That Brings in $900 to $1,100 Profit Per Day On Autopilot